I'm going to take a couple weeks off from doing any blogging. I need a short hiatus while I organize my photo projects, catch up on some reading, and sort some new ideas for the fourth year of PHOTO/arts Magazine.

Here is a little contest to keep you occupied during my short break. Simply use the gadget on the right hand column to follow this blog. On January 15th I will randomly select two followers who will win their choice of one of the books shown below. Click the links below each book to find out more about them. All you need to do is follow this blog between now and January 15th. That's it! Oh, and if you recommend a friend to follow PHOTO/arts Magazine, please let me know by commenting to this post. If your friend is one of the winners, I'll send you a book too! And for those who already follow PHOTO/arts, no need to do anything... you are already entered! 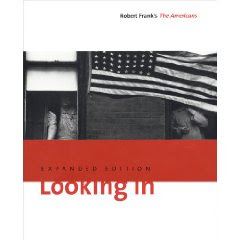 Looking In: Robert Frank's The Americans 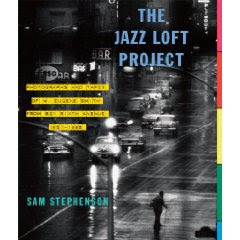 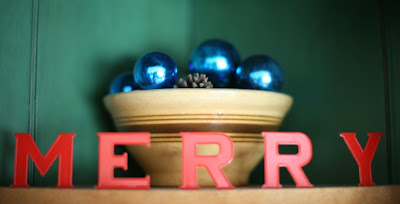 Best wishes to all for the Holidays and a Happy New Year!
1 comment:

Email ThisBlogThis!Share to TwitterShare to FacebookShare to Pinterest
Decade of Deception... 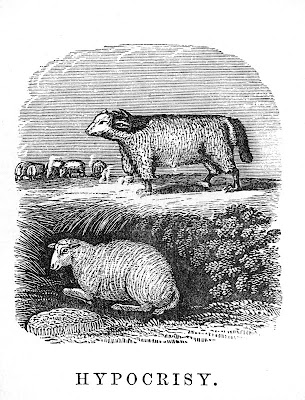 Has there ever been a decade full of more deception and disappointment?

The Big Zero
No comments: 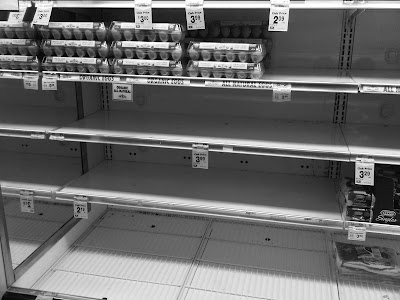 1. The demand for milk & eggs is directly proportional to the predicted amount of snowfall.

The year of driving around suburbia. By year end I will have logged over 14,000 miles in my car, driving in circles around the Philly suburbs. Always with my camera. Always watching with the photographer's eye. I see the same architectural facades over and over from day to day, sometimes 2 or 3 times a day. Borderline obsessive compulsive fixations on particular buildings and strip malls. Suppressing rage and anger at the mindless uniformity of retail architectural style and signage.

I am slowly noticing in my photographic work from the past year a context not just to the visual evidence of economic recession , but also to cultural trends and elements of the changing tide of American consumerism. The illusion of greater value for the dollar, the seductive promise of all you can eat. The inescapable allure of the going out of business sale. I am bombarded with these messages every day and every mile. 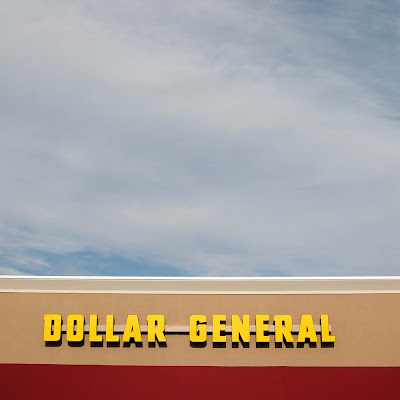 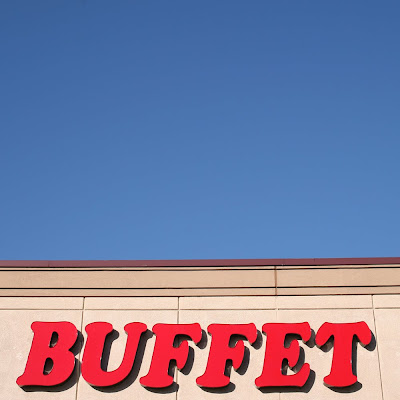 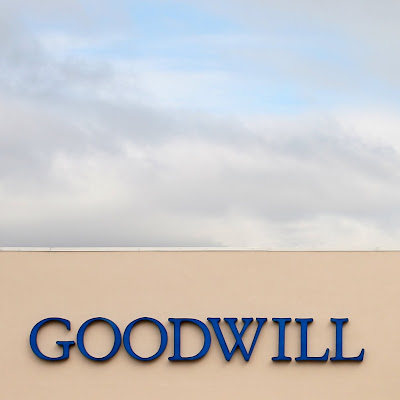 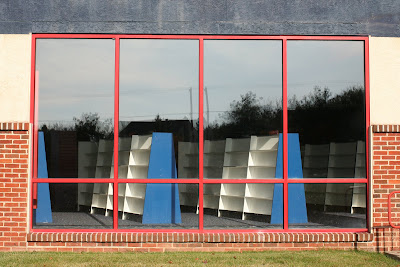 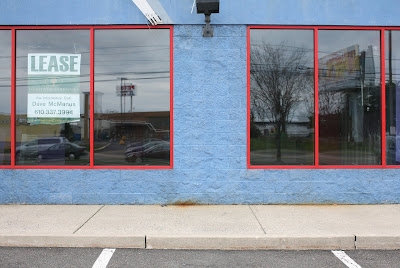 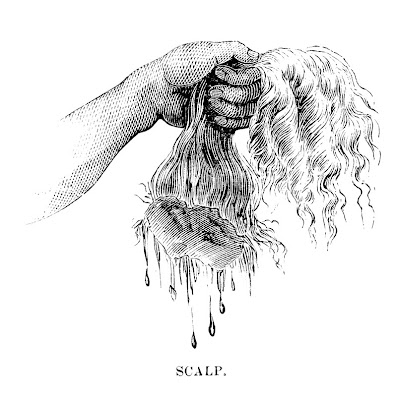 Continuing the study of words and music of Gil Scott-Heron, the following is from Notes from First Minute of a New Day, written in 1975. These words are eerily pertinent to the present times, not just in their perfect analogy to Wall Street cannibals devouring their own, but also in their strident call for self sufficiency and family unity as a source of strength. In 1972, Scott-Heron wrote, "We do not need more legislation or more liberals. What we need is more self-love and self-respect. By every means necessary!" It seems clear that the revolution of change that Scott-Heron refers to has little to do with government assistance, and I'm certain his world view was/is for the most part based on a general distrust of government.(To say the least!) I would love to know how he would edit or change these notes if he were writing them today.

"There is a revolution going on in America/the World; a change as swift as blackening skies when the rains come, as fresh and clear as the air after the rain. We need change.

The seeds of this revolution were planted hundreds of years ago; in slave ships, in cotton fields, in tepees, in the souls of brave men. The seeds were watered, nurtured and bloom now in our hands as we rock our babies.

It is mid-winter in America; a man made season of shattered dreams and shocked citizens, fumbling and frustrated beneath the crush of greed of corporate monsters and economic manipulators gone wild. There are bitter winds born in the knowledge of secret plans hatched by Western Money Men that backfired and grew out of control to eat its own.

We must support ourselves and stand fast together even as pressure disperses our enemies and bangs at our doors. No one can do everything, but everyone can do something. We must all do what we can for each other to weather this blizzard.

Now more than ever all the family must be together, to comfort, to protect, to guide, to survive because... there is a revolution going on in America/the World."

from Now and Then... The Poems of Gil Scott-Heron
2 comments:

Email ThisBlogThis!Share to TwitterShare to FacebookShare to Pinterest
Labels: Bibliography
Too Arrogant to Fail

Here's a new twist on TARP. This version is the Troubled Artist Relief Program. Seems Annie Leibovitz is in deep financial doo doo. She failed to meet a $24 Million loan payoff last September to Art Capital Group, who sued Leibovitz for "boldly deceptive conduct".(How dare they!) The whole mess was sorted out with Annie regaining control of her copyrights and her homes in exchange for a new balance due of $30 Million. The entire balance is due next summer. $30 Million. Not till next summer (whew!)

Leibovitz is taking stock of her inventory to try to figure out how to sell some stuff between now and next summer,and consulting with art experts who have urged her to avoid seeming "too desperate". (aka Bernie Madoff Reverse Psychology Sales Method... when the shit is about to hit the fan, act as if you really don't need any more investors, but "ok, if you insist...I guess I'll take your money... I mean, it's hardly worth the paperwork involved... sigh... yeah... no, make it out to cash")...

...and/or fall back on the old Price It So High That It Must Be Worth It, Right? method of selling art. (see Hooverville by Powhida & Townsend)

In a brilliant combination of all of the above, we are pleased to announce

157 Glossy Photos, you heard it right, 157!!
Enough to decorate your entire vacation house, and still have some left over
to give to those hard to shop for friends & relatives.

Only TEN sets are planned*

Operators are standing by

Void where prohibited by law. Read prospectus carefully. Consult your attorney. Investment is NOT guaranteed by the Federal Reserve Bank. Actual results may vary. Frames not included. Cash or Paypal only. No personal checks accepted. All sales are final. No returns. Official "White House Portrait of 2009" is not included in the set. You can get that one for free off of Flickr.

(*) "Planned" only means "Maybe" ten sets. There could be hundreds more.

How Could This Happen to Annie Leibovitz? 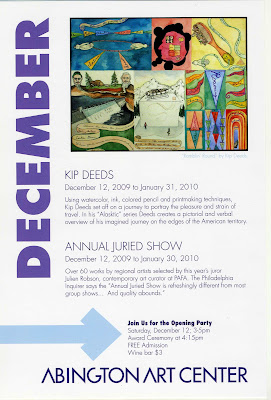 I'm honored to have Value City chosen to be included in the 2009 juried show at Abington Art Center. I am always impressed with the way AAC puts this annual show together with a subtle and seemingly deliberate connection of themes between independently submitted art works. Achieving a curated look from a random pool of submissions is an art form in itself. The show opens on Saturday December 12 with a reception from 3-5PM, and then runs through January.


Value City is part of my ongoing series In These Hard Times. Five images from the series are currently being displayed at The Painted Bride in Philadelphia through the end of December, and the photograph Goodwill has been chosen to be exhibited at the Missoula Art Museum in early 2010. 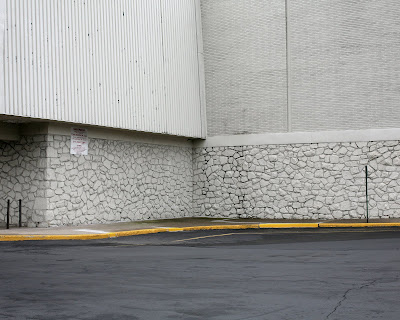 Value City by C.H.Paquette 2009
No comments:

Email ThisBlogThis!Share to TwitterShare to FacebookShare to Pinterest
“We don’t have genes for reading. It’s an activity we invented, and by doing it, we show that our brain has the capacity to go beyond itself, to take all these circuits that were created for oral language or vision, and do something entirely different with them — deduction, critical analysis, imagination, contemplation.”

Dr. Maryanne Wolf
author of “Proust and the Squid: The Story and Science of the Reading Brain” 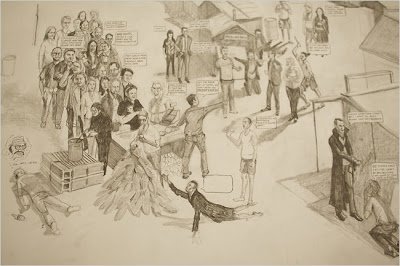 “This is about how out of touch the art world is with economic reality.” 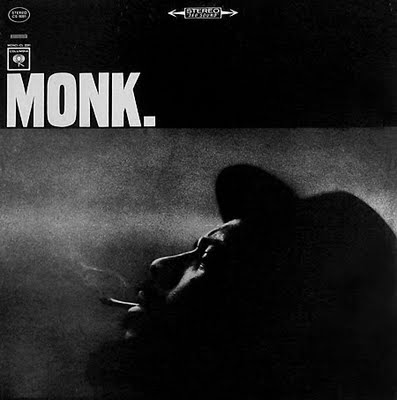 Jazz and Photography are inseparable for me. Jazz music has influenced my own artistic style for longer than I have consciously realized. Black & White photographs and Jazz were made for each other. Smokey, sultry, grainy images. If I close my eyes and imagine being in the darkroom, I will hear the barely audible sounds of Coltrane or Miles playing on the radio in the background. Temple University's WRTI hosted by Bob Perkins... "BP with The GM"... Bob Perkins with the Good Music. Goes back so many years it becomes part of my soul. I've been thinking about this quite a bit lately.Last month I saw Gil Scott-Heron perform at B B King's Blues club. Thirty years after seeing him perform for the first time in North Philly back in the late 70's. His music and lyrics have inspired me immensely all those years, and I have embraced them again as fully relevant to these hard times. Pieces of a Man. We Almost Lost Detroit. Winter in America. etc. etc. 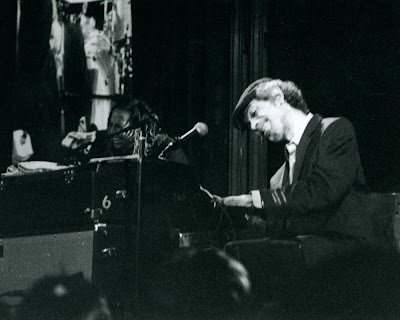 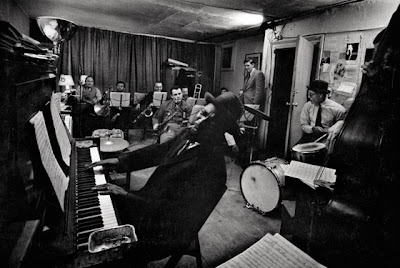 In the late '50s and early '60s, photographer W. Eugene Smith made approximately 4,000 hours of reel-to-reel tape recordings, and took nearly 40,000 photos, in his lower Manhattan loft apartment. His was a building where the era's top jazz musicians stopped by for jam sessions at all hours of the night. In a series of four reports on NPR's Weekend Edition, culled from a 10-part series on WNYC, Sara Fishko explores the stories of The Jazz Loft. This is an incredible look into not only the world of the highpoint of the New York Jazz scene, but the fascinating voyeurism and obsessive nature of W. Eugene Smith. 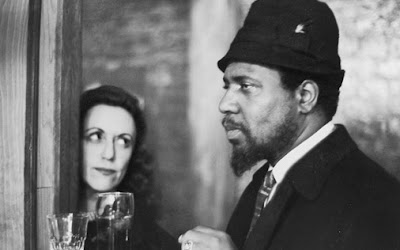 
She was a beautiful British-born heiress from a powerful Jewish dynasty. He was a quirky African-American musical genius who helped pioneer the jazz revolution known as bebop. They met in Paris in the 1950s and were inseparable for the next 28 years, as she became a loyal friend and fiercely protective patron of some of the era's greatest musicians. THE JAZZ BARONESS chronicles this unlikely, controversial relationship. This very interesting documentary has been showing on HBO in recent weeks.The film weaves together archival footage and interviews with family members, friends, jazz historians and luminaries, among them Sonny Rollins, Quincy Jones, Thelonious Monk, Jr., Roy Haynes, Curtis Fuller, The Duchess of Devonshire and Clint Eastwood. THE JAZZ BARONESS also features footage of the groundbreaking Thelonious Monk Quartet playing such classics as "Straight, No Chaser," "The Bolivar Blues" and "Nutty," including a 1965 BBC appearance, when Monk finally began to get the recognition, if not the financial rewards, he had worked for. Historical documentary about a unique love story. 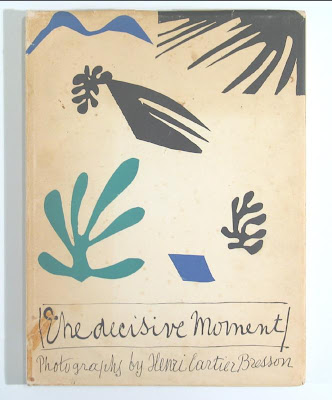 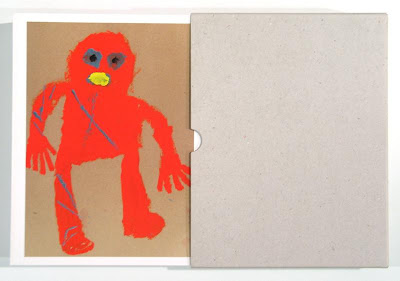 Email ThisBlogThis!Share to TwitterShare to FacebookShare to Pinterest
Labels: Photo Books
Newer Posts Older Posts Home
Subscribe to: Posts (Atom)
PHOTO/arts Magazine is a compendium of photography and contemporary art topics. We regularly feature the work of emerging international artists. Created in 2006, Christopher H. Paquette is the editor and founder. Feedback, comments, and submissions for publication are always welcome.