This property continues to be "Available"... I can't imagine why no one is interested in it. Beautiful downtown Warrington, Pa. 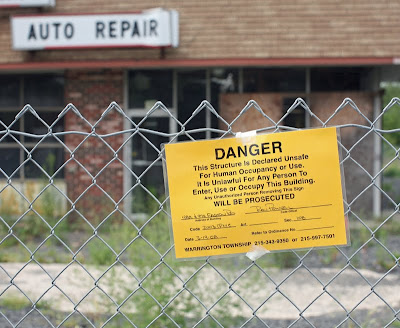 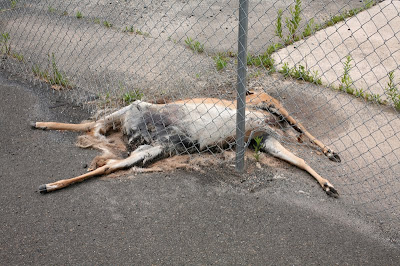 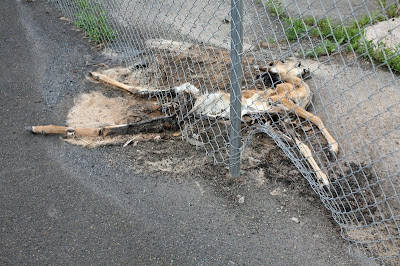 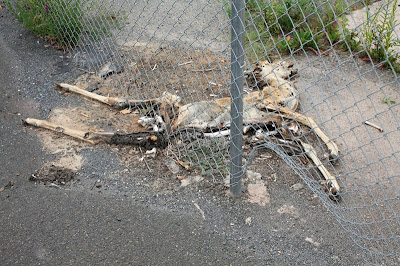 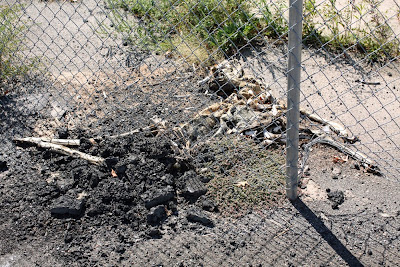 Email ThisBlogThis!Share to TwitterShare to FacebookShare to Pinterest
GRANTSEEKING BASICS FOR INDIVIDUALS IN THE ARTS

Leeanne Bowley of the Foundation Center in NYC will present this FREE workshop.
If you are an individual involved in the arts and looking for funding to complete a project, mount an exhibition, put on a performance, conduct research, or anything else arts-related, Grantseeking Basics for Individuals in the Arts will show you how to:

• Identify funders in the arts.
• Explore the option of fiscal sponsorship.
• Create a step-by-step plan to find funding for your needs as an individual grantseeker. 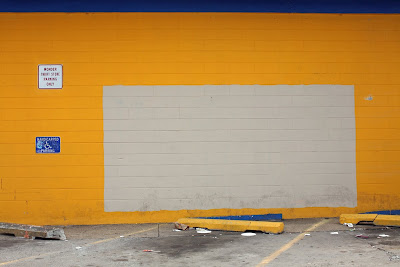 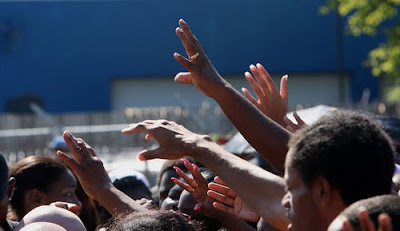 Thirty thousand people turned out in East Point(near Atlanta, Ga.) on Wednesday seeking applications for government-subsidized housing, and their confusion and frustration, combined with the summer heat, led to a chaotic mob scene that left 62 people injured.

At the Tri-Cities Plaza Shopping Center, emergency vehicles passed each other, transporting 20 people to hospitals. Medical and police command posts were set up on scene. East Point police wore riot gear. Officers from four other agencies supported them. Yet no arrests were made.

All of this resulted from people attempting to obtain Section 8 housing applications and, against long odds, later securing vouchers for affordable residences. Some waited in line for two days for the applications.

As they used to say on Sesame Street, "One of these things is not like the others, one of these things is not the same." The current recession "is not like the others." At 33 months it is already more than three times longer than the average length of the other ten recessions we've had since WWII. There are no clear signs it will be ending anytime soon. Glimmers of a recovery appear from time to time, but most indicators remain depressed and many are worsening. On balance, the outlook is more negative than positive. Not since the Great Depression have we had two consecutive years of unemployment in excess of nine percent. What we're seeing is economic stagnation. 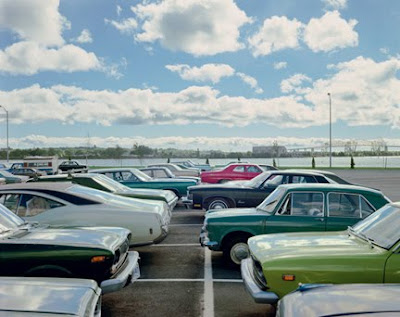 Starburst, the first-ever museum survey of the "New Color Photography" in the 1970s, stars 18 artists who fast-forwarded their medium out of its black-and-white past and put it at the center of contemporary art. The exhibition features generous bodies of work by eighteen artists, from the still-prominent, such as Stephen Shore, William Eggleston, Jan Groover, and Joel Sternfeld, to key figures of the period, including Eve Sonneman, Neal Slavin, John Pfahl, and Barbara Kasten 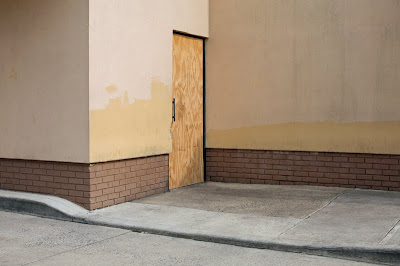 This image is an abandoned and vacant Popeye's Louisiana Kitchen restaurant in Northeast Philadelphia. I drive past it almost every day and it is a strong piece among the images in my Hard Times series. Over the past few days I have noticed a large sign on the facade of this building announcing that it will soon become a new Krispy Kreme location. Yesterday as I approached the building I couldn't help notice what looked like protesters on the sidewalk as well as some people standing in the middle of the street handing out flyers. When I got closer I saw two people holding up a banner that read

"Krispy Kreme is unhealthy for our neighborhood !".

I thought, Wow... people are actually protesting the arrival of a Krispy Kreme doughnut shop in Northeast Philly?. Times sure have changed! I rolled down my window and was handed a flyer... 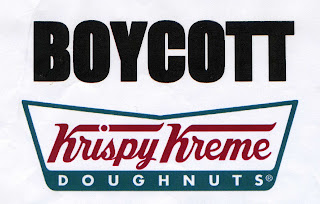 Hmmm... this boycott wasn't exactly what I assumed it to be. Turns out it was the local Electricians Union protesting against Krispy Kreme for intending to use non-union electricians when it remodels this building. The flyer was asking me to call a toll free number to let Krispy Kreme know I would be boycotting this store when it opens.

Yes,I will most certainly be boycotting this store when it opens, but not for the reason the union protesters want me to. It's sad and pathetic that the only thing that can fill the void left by a drive up window that served fried chicken containing 20 grams of fat and over 1100 mgs of sodium per piece is yet another doughnut shop. (There are currently 20 Dunkin Donut locations within 5 miles of my house, according to the DD Store Finder) This is all we are now. This is the best we've got. Another drive up, belly bursting, artery clogging, sugar supplying window. That is more than enough reason to boycott this new business.

As pathetic as that idea is though, it is marginally better than an abandoned and vacant building adding to the blight of a neighborhood and serving only as a large graffiti canvas. The general contractor the union members were protesting is a relatively small Philadelphia based company known primarily for residential work. I was actually surprised to see their name on the flyer, but I guess in this economy they are taking on any project they can get. This project will employ tradespeople from the Philadelphia area, albeit non-union tradespeople, but local nonetheless. People trying to keep food on their tables and stay current on their bills. Work is work, and we take what we can get these days. The real shame is that we take another corporate controlled, national chain restaurant without so much as a second thought. Imagine for a moment that this restaurant was being opened by a local family who would operate from this single location... live in the neighborhood... purchase supplies locally instead of being trucked in from some Krispy Kreme warehouse hundreds of miles away... spend their profits locally instead of shipping them off to far away banks and bankers.

The union flyer being handed out on the street stated...
We local tradesmen are your neighbors... the guys who coach your kids... and the men and women who help keep your neighborhoods clean and safe.

We can't have it both ways. We can't demand and seek protection for locally sourced labor while ignoring the scourge of the national and international corporate chain operations. There is no effective level of communication or relationship between local tradesmen and a corporate employer hundreds or thousands of miles away. The act of walking into a storefront, shaking the manager's hand and asking for a job doesn't exist anymore... job applications are made on a faceless and anonymous basis over the internet, the application is sent off to who knows where... never to be looked at or responded to. Customer feedback and complaints are handled over toll free 800 numbers and emails providing automated responses thanking us for our concerns and promising to get back to us as soon as possible. This is all we are now. This is the best we've got. So we make signs and print up flyers and take to the streets in front of abandoned vacant buildings complaining about a far away doughnut company that wants to hire some guys who are willing to work for a few less dollars just to put some food on the table and make sure the bills are paid... the never ending cycle of the rat race we call the American dream.

We are in for a collective world of hurt if we don't get back to some sense of sanity in this country... spiritually, physically, and economically.

That is my sermon for the week.... peace be with you.
1 comment:

Submit your artwork for SLPS Philadelphia! We are currently seeking cohesive, creative, and thought-provoking submissions for the slideshow! It doesn't matter if you are a photojournalist, painter, glassblower, fashion or fine-art photographer, or sculptor. Artists working in every medium are invited to submit, and those selected by our curators will present their work alongside one another in a relaxed and spirited atmosphere. Submissions will be collected online in advance of the slideshow. Multimedia presentations are also welcomed and all shows must be accompanied by music, commentary, or other audio surprises.

Email ThisBlogThis!Share to TwitterShare to FacebookShare to Pinterest
Labels: Philadelphia Photography
Newer Posts Older Posts Home
Subscribe to: Posts (Atom)
PHOTO/arts Magazine is a compendium of photography and contemporary art topics. We regularly feature the work of emerging international artists. Created in 2006, Christopher H. Paquette is the editor and founder. Feedback, comments, and submissions for publication are always welcome.