International Center of Photography
1133 Avenue of the Americas at 43rd
New York, NY 10036

A trip to ICP to see the Twilight Visions exhibit, was very worth while, but most of our attention was captured by the first floor exhibit of incredible photographs by Miroslav Tichý. Walk through the exhibit, then watch the documentary film showing in one of the small side rooms.After seeing the film, walk through the exhibit again and the realization of what Tichy managed to accomplish with the crudest of equipment and continuous social and psychological pressures will slowly sink in. This exhibit is a brilliant contrasting statement to the precision and detail of the Surrealists on the lower level. Tichy is the most interesting photographer you have never heard of.

Here is the fascinating story of Tichy from the ICP press release.

The first North American museum exhibition of the photography of the mysterious and reclusive Czech artist Miroslav Tichý will be on view at the International Center of Photography from January 29 through May 9, 2010. Now in his eighties, Tichý is a stubbornly eccentric artist, noted as much for his makeshift cardboard cameras as for his haunting and distorted images of women and landscapes, many of them taken surreptitiously. 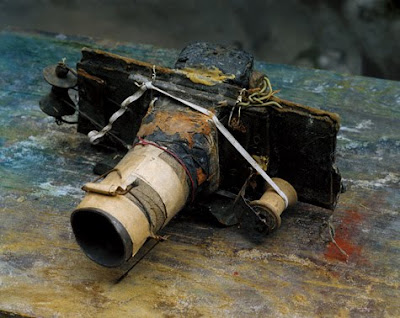 
Born in Moravia in 1926, Tichý studied painting at the Academy of Fine Arts in Prague in the years immediately following the Second World War. After Czechoslovakia’s adoption of communism in 1948, he left the Academy and turned his back on the official art world, withdrawing from mainstream society, in part as a political response to the social and cultural repressions of the regime. Regarded as a talented painter and draftsman influenced by Picasso and the German Expressionists, Tichý did not agree with the prevailing socialist realism of the day, instead forming an artist collective known as the Brněnská Pětka (Brno Five) with other likeminded SVU alumni. Constantly threatened and watched by the regime, the group took great risk in producing their work, even holding a clandestine exhibition in the Kyjov hospital in 1956. Tichý benefitted from the small, yet vibrant, cultural scene of Kyjov, taking in dance performances, plays, and beginning his first photographic experimentations with the artist Ladislav Víšek. Prone to mental breakdowns since his youth, Tichý worked alongside his peers until an apparent psychotic episode just before a planned exhibition in 1957 from which he withdrew his images. His work was not exhibited again until nearly four decades later. Over the years, his deliberately nonconformist lifestyle—as well as his mental illness—landed him in trouble with the authorities and led to periods of confinement in psychiatric institutions and the loss of his studio in 1972. 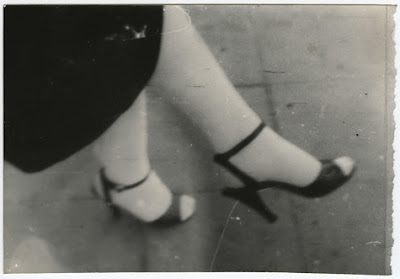 
Living in near isolation in his hometown of Kyjov, Tichý conceived a world populated by images of the local women, taking thousands of photographs from the 1960s through the late 1980s. Though he never stopped producing paintings and drawings, Tichý focused the majority of his attention on the photographic medium, practically reinventing it to suit his artistic vision of capturing the feminine essence with light. Save for the film, chemicals, and photographic paper he bought from a nearby drugstore, all his photographic equipment was self-made. Using cameras inventively constructed from found materials—shoeboxes, tin cans, clothing elastic, toilet paper rolls, even cigarette boxes—Tichý obsessively returns to the subject of the female form, whether viewed from afar with his makeshift telephoto lenses, or captured from the television screen. His intuitive method of photographing during daily walks about town might appear amateur in ambition, but the intensity, frequency, and regularity with which he creates reveal a unique and distinctly personal style of photography. Despite his camera’s crude optics—the lenses were cut from Plexiglas polished with sandpaper, toothpaste, and ashes—and skewed framing, the resulting images are formally complex, reflective of Tichý’s early art training, and vaguely reminiscent of the early works of the classical pictorial tradition. His images of women—often in bathing suits, bare-legged, or simply walking about town—are subtly erotic, taken from afar, often without the knowledge of the subjects. Tichý often embellished the surfaces and borders of these scratched, blurred, torn, and spotted images by drawing directly on them in pen or pencil, heightening the expressive quality created by his imperfect equipment. Sometimes framed or mounted on newspaper or cardboard, these highly personal objects were created for his own viewing pleasure, each negative printed only once with a homemade enlarger. 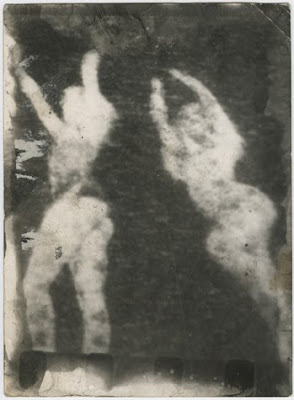 
In 1981, Tichý’s prolific body of work was brought to light by his longtime neighbor, psychiatrist Roman Buxbaum, who began efforts to document the artist and preserve the deteriorating photographs. Tichý’s work has received public attention only in the last five years, first going on view in an exhibition by Harald Szeemann at the 2004 Seville Biennale, where Tichý’s work won the “New Discovery Award.” After this exhibition, the Tichý Ocean Foundation was founded on the artist’s behalf by a group of trustees to preserve and exhibit Tichý’s work, which has since been shown at major museums including the Centre Pompidou in Paris and the Kunsthaus Zürich.

The ICP exhibition, organized by ICP Chief Curator Brian Wallis, includes a number of Tichý’s homemade cameras as well as approximately 100 of his photographs. Buxbaum’s 2004 documentary film, Miroslav Tichý: Tarzan Retired, will run continuously in the gallery. The exhibition will be accompanied by a catalogue published by ICP/Steidl, with essays by Brian Wallis, Roman Buxbaum, Carolyn Christov Bakargiev, Richard Prince, and Nick Cave.

fascinating - thanks Chris. If only NY was a wee bit closer...do you know if the exhibition will be showing elsewhere?

Jeana Marie.... I'll keep you posted if I learn of any other exhibits.