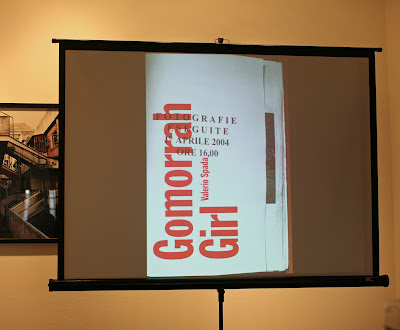 The first United States showing of Valerio Spada's Gomorrah Girl series is currently on the walls at the Philadelphia Photo Arts Center in Philadelphia, Pa. The exhibit opened on September 13th and runs until November 24th, 2012. Spada's self published book of the same title won the grand prize in the 2011 Blurb Photobook Now competition. The book is a uniquely designed format consisting of two books in one; larger staple bound pages of crime scene reports interwoven with smaller pages containing Spada's photographs. The crime scene reports are details of the shooting death of Annalisa Durante. It was meeting Annalisa's father on a visit to Naples that instigated the desire in Spada to create this series.


I have attended quite a few artist lectures over the years, but I have heard very few as mesmerizing as the one given by Valerio Spada at the Philadelphia Photo Arts Center on September 15th.  For ninety minutes non stop, Spada gave us a first hand account of the history of his series, which documents the crime and drug ridden neighborhood outside Naples that is the setting for his photographs. From his first encounter with the father of murdered teenager Annalisa Durante, to journeys inside heroin shooting galleries and dangerous situations with the Camorrah (mafia). Spada speaks very fluent English, but his unique accent that is strongly Italian with a slightly noticeable touch of French required intense concentration for me to follow every part of his story. I must admit I got lost a few times, but never once lost interest in the subject.

The most touching part of this series are the Gomorrah Girls themselves. We never see Annalisa except for a tiny portrait that hangs from a gold chain around her father's neck. The images of young girls we see in this series are growing up among one of the most difficult and dangerous environments in Italy.  Spada is a fashion photographer in Paris and it was significant to hear him talk about his reactions to meeting very young girls whose only dream in life is to become a sex symbol on the nightly TV news. The ambiguous messages they receive from Italian mainstream culture are compounded by the intensely difficult environment in which they are growing up. The Gomorrah Girls live in a world of lost adolescence; lost to violence, criminal social order, and a misogynistic sexual culture.  Spada presents us with a chilling look into the center of this world. 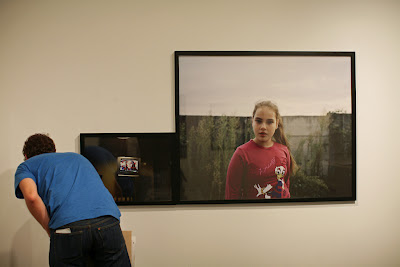