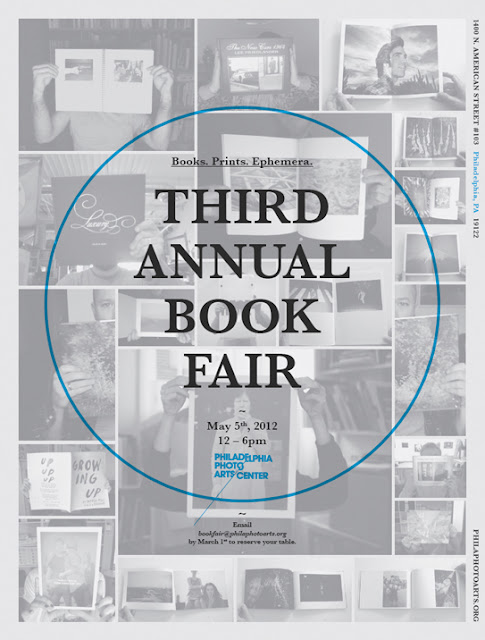 I attended the first book fair at Philadelphia Photo Arts Center two years ago and it was small but fantastic. This year's fair will be well represented by some of the best names in independent photobook publishing, showing that the PPAC Book Fair has grown into an important event in just three short years. Take a look at the list of participants....

The Indie Photobook Library will be presenting a first ever crowd sourced exhibition from its collection. You can nominate a book to be included in the PPAC Book Fair exhibit from the Indie Photobook Library by commenting directly on their Facebook page. I hope all fans of My Own Wilderness will head over and add a nomination. Here is a link to the nomination page...

Walking through the Museum of Modern Art in New York City a few weeks ago my eye caught a glimpse of an open hole in the plaster gallery wall and I honestly assumed there was a repair in progress. It seemed odd that it would be left exposed like that. Upon closer inspection I was entirely wrong. This was a "piece of art". A 1968 conceptual work by Lawrence Weiner titled "A 36" X 36" removal of lathing or support wall of plaster or wallboard from a wall".  I was slightly stunned, but also caught in the trap of ambiguity that is the very intention of this work. Weiner's sculptures are about language and gesture as much as they are about materials. The work exists as soon as the artist expresses the intent of removing the section of plaster from the wall. Another well known piece by Weiner from this time period is "Two minutes of spray paint directly on the floor...".  These works are considered the building blocks of post-minimal conceptual art.

A few moments later I stumbled upon (literally)  Carl Andre's stack of 120 firebricks in the middle of the floor. There are several versions of this work, the most notorious being Equivalent VIII (1966) which was purchased by the Tate Museum in 1972 for $3600 (USD), causing an outrage among art critics and the general public. Tate money is taxpayer money, and the debate over spending public funds for a "pile of bricks" went viral with over 1000 articles written in the papers and magazines. Turns out that $3600 may have been the bargain of the century as another version of Equivalent sold at a Sotheby's auction in 2008 for $1.1 Million.

Later that same day at the Whitney Biennial I came across a jumble of hanging electrical wires, part of an assemblage of found objects by Kate Levant. Now I was beginning to laugh out loud. I am a carpenter and builder by trade, and here I am walking through major museums in New York City looking at panels of plywood, stacks of bricks, and old wiring. I've seen these a thousand times before.


There is a part of me that loves this type of art.Architectural elements sing to me. The industrial design rooms at MoMA are a perennial favorite. Art is everywhere we look. Isn't that the fun and challenge of photography? Finding art in the everyday world?

Another side of me loathes this type of art. Especially conceptual work. Why should a bunch of old wires be considered worthy of inclusion in the Whitney Biennial ? What makes a stack of 120 bricks worth over a million dollars?  I look at work like Levant's wires and feel like I am being slapped in the face, or spit on. The curators are saying "Screw you if you don't understand the meaning or value in this work, we say its art!"  And isn't that the foundation of most conceptual art?

I was pleased to hear that My Own Wilderness participants Dead Porcupine are in the process of creating a photobook from their ongoing project Shiftless. Dead Porcupine is the collaboration team of Italian photographers Raffaele Capasso and Francesco Claudio Cipolletta.


Shiftless is a two year photographic project wandering around a former nuclear facility in southern Italy, not far from their home.  Here is an excerpt from their project statement...


Our photographic work "Shiftless" is the result of two years of wandering around the disused nuclear facility Garigliano, in southern Italy. The plant, named after the river that runs along the path to the sea, closed in 1982. Today, it still contains 3000 cubic meters of nuclear waste inside concrete blocks, some of them stored underground in plastic bags. The atmosphere is that of a desert place. Looking at the broken windows of the caravans, the dried palms, neon lights swaying, walls collapsed, we felt a kind of inertia, suspension.That's why we decided to express our reactions and feelings about this beautiful land full of potential, subject to the negligence of man. The river flows into the sea, the sight of the waves that sweep the shore shows an impressive body of all waste types. We see this mesage: "Nature makes us all what it gets."


Dead Porcupine is currently raising money for this book project on Crowd Books and have also created a project video posted to Vimeo.  The book design as seen on the Crowd Books project page is fantastic, and I'm excited to be supporting this project. The work produced by these two photographers is really gorgeous and I highly anticipate my copy of the finished book. Get your own copy by supporting this project. Links to do so are listed below.

Naked Before The Camera

Naked Before The Camera
Metropolitan Museum of Art
March 27- September 9, 2012

The Metropolitan Museum of Art presents a concise historical chronology of the nude in photography. Entering the dark narrow hallway leading into this exhibit, the curator has clearly intended to evoke a slight sense of illicit prurient discovery. I half expected to see a flashing "Live Nude Girls" sign around the corner. All that is missing are some red lights, and my guess is that more than a few less adventurous museum goers have decided not to enter this exhibit. They have nothing to fear. With a few exceptions, the images presented are quite tame by any modern standard. An early survey showcases 19th century works by Eugene Durieu, Oscar Gustav Rejlander, and Gustave Le Gray, as well as several images by unknown photographers. Mostly painterly examples reflecting the general style of of photography at that time. Early 20th century works by Man Ray, Brassai and Franz Roh show the departure from pictorialism championed by modernists of the 1920's and 30's. For me the exhibit really takes off with works from the mid 20th century and beyond, with brilliant examples by Diane Arbus, Bill Brandt, Irving Penn, and Emmet Gowin. It is a shame to see only one example from the current century, resulting in a sense of incompletion. The exhibit is produced entirely from the museum's own collection, and it had better start purchasing some contemporary works in this genre. That suggestion has me wondering what contemporary photographers would fit in with this survey?


Naked Before The Camera


Continuing my annual tradition of making and photographing Ikebana sculptures in celebration of the brief season of flowering trees. I create in the form of Jiyuka (freestyle) Ikebana. The consistent framework is a unique scavenged piece of driftwood, a bird's nest from the previous year, and seasonal blossoms. This becomes a continual process for me. In the autumn, when I travel to Minnesota and the Great Lakes area I am searching for the perfect piece of driftwood. In the winter, when the trees are bare, I am scanning the trees for abandoned nests. This is the only time they can easily be seen while walking in the woods. And in the springtime, I am patiently waiting for the trees to flower, and deciding which blossoms to choose for my sculpture. When the brief flowering time is over, the leaves appear and the birds begin to build new nests in the hidden cover of foliage.  The cycle continues, and I begin to think of future sculptures. The following text is from some information I found on Wikipedia. The Haiku is from the Japanese master poet Shiki.


Hanami ("flower viewing") is the Japanese traditional custom of enjoying the beauty of flowers, "flower" in this case almost always meaning cherry blossoms ("sakura") or (less often) plum blossoms ("ume"). From the end of March to early May, sakura bloom all over Japan, and around the first of February on the island of Okinawa. The blossom forecast (sakurazensen, literally cherry blossom front) is announced each year by the weather bureau, and is watched carefully by those planning hanami as the blossoms only last a week or two. A more ancient form of hanami also exists in Japan, which is enjoying the plum blossoms (ume) instead, which is narrowly referred to as umemi (plum-viewing)  Read more about Hanami here


I could not see him


That fluttering
Fly-off bird...
But the Plum-Petals...

The spiritual aspect of ikebana is considered very important to its practitioners. Silence is a must during practices of ikebana. It is a time to appreciate things in nature that people often overlook because of their busy lives. One becomes more patient and tolerant of differences, not only in nature, but also in general. Ikebana can inspire one to identify with beauty in all art forms. This is also the time when one feels closeness to nature which provides relaxation for the mind, body, and soul. Read more about Ikebana here