Elaine Kurtz: A Retrospective
Elemental: Nature as Language in the Works of Philadelphia Artists

One of the most intriguing images to me in this dual exhibit at the Woodmere Art Museum is a photograph of Elaine Kurtz taken in 1978 by Rosalind Solomon.  Kurtz is standing in the corner of a gallery in Washington, DC in front of two of her paintings, wearing a full length fur coat and hiding her face behind her hands as if in shame or embarrassment. The irony here is that this exhibit focuses on the work of Kurtz and twenty three other artists who share an interest in the language of art in organic forms and metaphors of nature.


During the 1970's Kurtz was living in Washington DC while her husband Jerome worked in the Carter administration. Her works from that decade are bold and geometric, abstractions and brief experiments with Pop Art. They are meticulously crafted and show a rigid methodology bordering on perfectionism. Some of these images have been described by exhibit curator Pamela Birmingham as having an "immaculate surface"... with "no brushstrokes, no sign of the artist's hand".The lack of emotion in these early images is as anonymous as the Solomon portrait.

In the 1980's Kurtz's work began a radical shift towards the organic. She started using sand and mica as well as metals to create flowing works that eventually moved into a semi-sculptural realm. Earth Series (1985) is one of the first major works in which Kurtz used sand with paint and the hypnotic blue painting has the effect of a Mandala. (The painting is behind Kurtz in the photograph below taken by Seymour Mednick in 1984)  Later works from her Alluvial Series move deeper into spiritual and emotional levels as Kurtz, a lifelong atheist, began to investigate the subject of God. The show is a stunning example of transition and maturity in the life of a talented artist.


This retrospective exhibit is beautifully and thoughtfully presented in the wonderful gallery spaces of the Woodmere. The accompanying group show, Elemental: Nature as Language in the Works of Philadelphia Artists feels a bit chummy and therefore somewhat forced. A single nod to photography, with three works by Diane Burko , seem hastily chosen. I much prefer the deliberate exclusion of photography in an exhibit than what can seem like gratuitous inclusion. A floor based sculpture by Dina Wind, Black Island (2012), while ecologically thought provoking, is absurdly out of place in this exhibit. On the other hand, there are more than enough very strong selections to maintain visual interest in this conversation between artists who were friends and colleagues of Kurtz. Look for wonderful examples from Edna Andrade (1917-2008), Thomas Chimes (1921-2009), Frank Bramblett (b. 1947), Neysa Grassi (b. 1951), and Astrid Bowlby (b 1961).

In 1986, photographer and Photo Review founder and editor Stephen Perloff had a “30 Year Retrospective” at Haverford College, as he included a picture of his parents he made at the age of eight with his Davy Crockett camera. Perloff actually started seriously making photographs ten years later, in 1966, and has had a lengthy career that has included studies of the built environment of Philadelphia, a rephotographic project in the city (Philadelphia Past and Present), images made in Philadelphia’s Fairmount Park, and a multi-year study of the town of Centralia, Pennsylvania, which famously had a coal mine fire burning beneath it. He has also made numerous portraits of people like photographers W. Eugene Smith and Emmet Gowin, monologist and actor Spalding Gray, feminist Kate Millett, poet Elizabeth Alexander — who read at President Obama's inauguration — and dancer Lucas Hoving, among others. Most of those photographs were made with a 4x5-inch view camera. Among his 35mm work are images made on travels to Europe and the Far East and a moving series of the last seven months of his father’s life titled “Dying at Home.”


But except for two SX-70s that were included in a Brooklyn Bridge centennial show in New York City in 1986, the work he has exhibited has always been in black-and-white. Perloff often shot color along with black-and-white, but he never really learned to print color and never exhibited this work.

With the advent of digital technologies, however, Perloff has revisited this work, scanned the Kodachrome slides, which are still pristine, and made new digital prints. “I always knew there were wonderful images among my color work,” Perloff recalls, “but after looking at them a couple of times and maybe having a slide show once in a while for a couple of friends, the work went into storage and was somewhat forgotten. I realized that with a high-quality scanner and printer I could bring these images back to life and the results have been everything I imagined.”

“This show will have a sampling of some 20 images, but there are many more I hope will be exhibited,” Perloff says. “That’s why I titled this exhibition ‘Unseen Color, Part I.’ We’ll see!”

Hello from the Future...


Everything that we do during Lent is to make us aware of the Lord, and less focused on ourselves. In its perfection, Lent is a season for reflection upon and delight in the goodness of our God.
No comments:

Saturday, February 18th, 2012
Lecture: 6:30
Book Signing: 7:30
The Philadelphia Photo Arts Center is pleased to host a lecture and book signing by Philadelphia-based photographer Zoe Strauss. Her photographs portray under represented and marginalized people and places within the Philadelphia area and abroad. These efforts have culminated in a portrait of the region and nation that is both honest and inquisitive, revealing the beauty of every day life and it’s consequences.
Zoe Strauss, born 1970, is an installation artist and photographer living and working in Philadelphia, PA. She recently completed her 10-year I-95 project that culminated in an installation of photographs under interstate 95 in South Philadelphia. Strauss has exhibited in the 2006 Whitney Biennial, the Philadelphia Museum of Art, the Philadelphia ICA and had two solo shows at Bruce Silverstein Gallery. In 2005, Ms. Strauss was awarded a Pew Fellowship in the Arts and in 2007 she was awarded a USA Gund Fellowship. Her first monograph, America, was published in 2008. Her second book, 10 Years, will be co-published by the Philadelphia Museum of Art and Yale University Press in early 2012.
No comments: 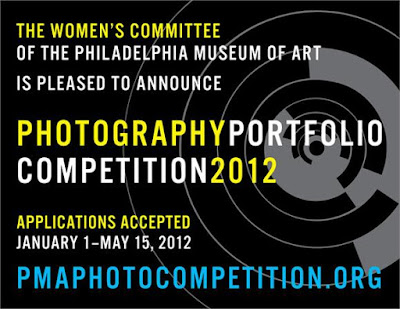 I was delighted to learn that My Own Wilderness participant Denis Tarasov will be included in the upcoming Fotofest International Biennial exhibit Contemporary Russian Photography 1950-2012. Tarasov is among 22 photographers being featured in a special exhibit that showcases the Young Generation of Russian photographers.

The Biennial explores  modern and contemporary Russian photographic history over the last five decades, from the post-Stalinist period of the 1950s to the present day.  Three main  exhibitions, created for the FotoFest 2012 Biennial, present  three periods of Russian modern and contemporary photography,   with  the works of 142 artists from Russia, Belarus and the Ukraine: After Stalin, “The Thaw”, The Re-emergence of the Personal Voice (1950s-1970s), Perestroika, Liberalization and Experimentation (1980s-2010), and The Young Generation (2009-2012). Of the works, on loan from private collections and the archives of the artists themselves, many are being shown for the first time outside of Russia.

With a population of 143 million people, Russia spans two continents and nine time zones, while its citizens speak 28 languages. It is a global powerhouse fitfully engaged with capitalism, consumerism and an ongoing struggle to define itself as a modern nation in the context of its own history and culture. FotoFest’s 2012 Biennial will serve to introduce an international audience to never- or little-before-seen contemporary Russian art practice and culture through the medium of photography.


Unlike their predecessors, the young generation of Russian artists today has little direct experience with Soviet Communism. Growing up after its collapse, they began their careers as part of a globally-connected, consumerist and individual-oriented society. Although some have the means to leave Russia to study art in Western Europe and the U.S., many others continue to work inside Russia. In contrast to the sharply ironic and outward-looking artists of the Perestroika periods, younger artists are looking inward, immersed in their own personal experiences and the psychological dilemmas of growing up in modern-day Russia. The artists in The Young Generation exhibit are:

The work of Denis Tarasov, as well as many other young Russian photographers can be seen in the recently published book My Own Wilderness, produced by PHOTO/arts Magazine and edited by Christopher H Paquette.  The book contains the work of 44 photographers from around the world, and 14 of the contributors are from Russia.

A full preview of the book can be seen here.....  My Own Wilderness
No comments:

More Art Galleries of the Public

I've been re-thinking several previous photo projects and the ways that they connect with each other. One of them is Roadside Memorials. I always saw them in terms of vernacular folk art, and to me they were more than expressions of personal grief, but were also artistic. I see those same patterns in other roadside oddities as well. This framed section of plywood has an unmistakable element of contemporary art to it. To me it  represents a receding roadway. (I've seen worse art in galleries.) With the American flags and the "For Sale" sign, the scene transforms into a statement about commercial art instead of the obvious indications to depressed real estate conditions.
No comments:

Art Galleries of the Public 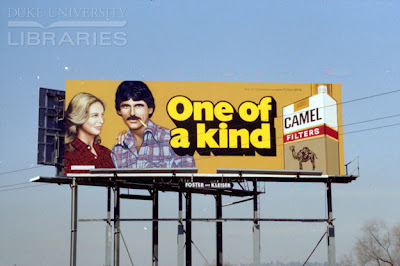 Wall Street Journal, April 14th, 1960 , quoted Burr L Robbins as saying that “billboards are the art gallery of the public,” Mr Robbins is the President of the General Outdoor Advertising Co. Inc.
Mr Robbins suggested that since “billboards are the art gallery of the public,” his industry might enhance its public image by donating valuable billboard space in cities and countryside to display huge reproductions of such historic masterpieces as the “Mona Lisa”, “Blue Boy”, “Song of the Lark”, and “Lavinia”. Unhappily this promising campaign appears to have made little headway to date. 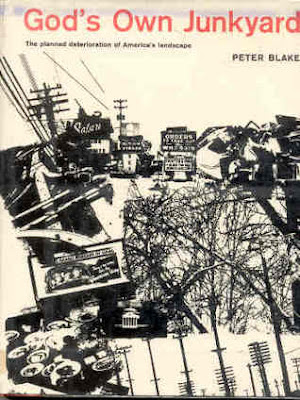 This book is extensively discussed in the essay Beyond Wilderness: Robert Adams, New Topographics, and the Aesthetics of Ecological Citizenship by Finis Dunaway in the book Reframing the New Topographics.
It contains a terrific collection of images of late 1950's and early 1960's suburban sprawl and urban blight. Finis Dunaway discusses this book in direct comparison to some of the 1960's Sierra Club Exhibition Format series of coffee table books by Ansel Adams and Elliot Porter, in context to the ways that the New Topographic photographers interpreted the landscape and ecological concerns. 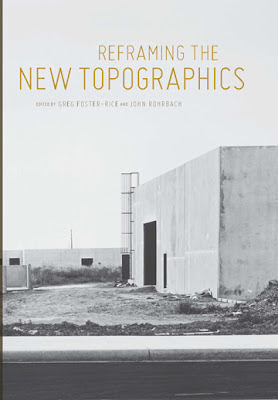 Reframing The New Topographics
By Greg Foster-Rice, John Rohrbach
Center for American Places at Columbia College Chicago (2010)
the prevailing tradition of landscape photography, the West Coast aesthetic as defined by artists such as Ansel Adams, Wynn Bullock, Minor White and Paul Caponigro. While the photographs associated with New Topographics knowingly exchange the sublime for the subtle, many carried an emotional depth and complexity as well as an overt moral position equal to, if not greater than, the work of these more popular and familiar photographers. They are anything but what might be considered dispassionate or documentary". 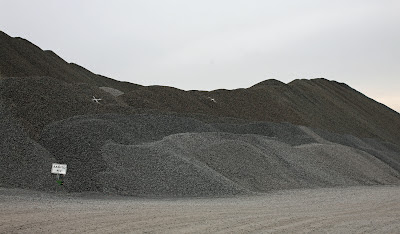 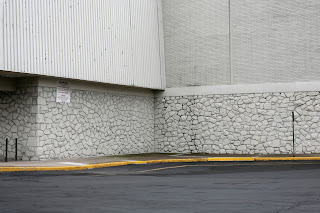 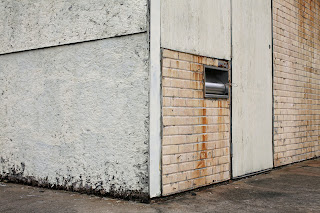 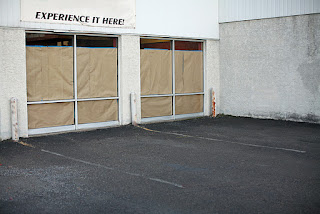 Poetry of Nowhere
No comments: