"The dream of Arcadia, a mythic place of beauty and repose where humankind lives in harmony with nature, has held an enduring appeal for artists since antiquity. With its promise of calm, simplicity, and order, it has served as both an inspiration—the sought for, but never fulfilled ideal of a paradise here on earth—and as an image of refuge, a place that is distant and seemingly protected from the vicissitudes of life. In the late 19th and early 20th centuries, a time of sweeping and often disruptive social, technological, and intellectual change, this dream found a powerful new currency and once again spurred the imagination of a new generation of painters—many of whom played key roles in the development of modern art."

During the opening remarks for this exhibit, curator Joseph J. Rishel posed the question 'Why did three of the most radical avant-garde painters of the early 20th century explore an almost cliche subject matter such as Arcadia?'  Not only did these painters simply explore this subject, they did so on a monumental scale. This recently opened exhibit at the Philadelphia Museum of Art is based upon three enormous canvases, each an acknowledged masterpiece and each, in its own distinctive way, a powerful response to the Arcadian tradition: Paul Cézanne’s enigmatic The Large Bathers (1906; Philadelphia Museum of Art), the largest of this artist’s paintings in an idyllic landscape, which caused a sensation when it was first exhibited in 1907; Paul Gauguin’s Where Do We Come From? What Are We? Where Are We Going? (1897-98; Museum of Fine Arts, Boston), which situates an Arcadian theme in the distant realm of Polynesia where this artist spent his last years and created some of his finest and most powerful works; and Henri Matisse’s Bathers by a River (1909-17; The Art Institute of Chicago), the mural-sized painting that was inspired in part by Cézanne (Matisse owned and revered a small painting by Cézanne on the theme of the bathers, citing it as one of the greatest influences in his artistic life) and represents one of the greatest achievements of Matisse’s career.

This exhibit attempts to show ways that artists look to the past using sometimes radical new methods to present endearing subjects and as a way to measure themselves against the work of previous masters. Arcadian themes had long dominated European painting, and the well chosen artists and works presented here reflect the ways in which a timeless theme is brought into modernist perspective. A refreshing take on old themes, if nothing else, this is a marvelous way to escape the summer heat. 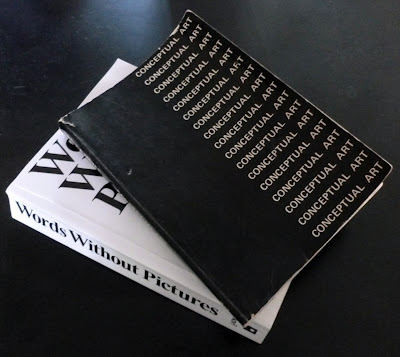 This book is referenced in Alex Klein's essay Remembering and Forgetting Conceptual Art from the book Words Without Pictures (Aperture 2009). Klein described the book as a 'classic compendium' and made special mention of the cover design being representational of the look of Conceptual practice... black and white, stripped down, serial, bureaucratic and textual. It is easy to see that this book must have had some influence on the design of Words Without Pictures, of which Klein was the editor.

As I love to do, I searched the book on Amazon to see if I could find a copy and was delighted to find a decent first edition for about four dollars. It is a terrific little book that was part of a unique line of art books published by E P Dutton.  Here is the text from the blurb on the back cover...


Here is a lovely tribute to dads everywhere on this Father's Day 2012. I bought this nice little book several years ago at a used bookstore for a few dollars. It is a 7" X 9" Cloth bound hardcover book with image wrapped boards on the front and back.  Published by Hill & Wang, New York in 1962, and originally published in Germany by Hanns Reich Verlag in 1960. The book begins with an essay by Eugen Roth, and contains seventy-two images from photographers who are mostly unknown to me, although also a few well known names such as Dorothea Lange, Henri Cartier-Bresson, and Rene Burri.  The book is reminiscent of the style of images of the time period, especially that of Edward Steichen's Family Of Man exhibition of 1955. In fact,  an image by Dorothea Lange from the Family Of Man exhibit is also the back cover image for this book.

I love you too Little Brown Mushroom ! 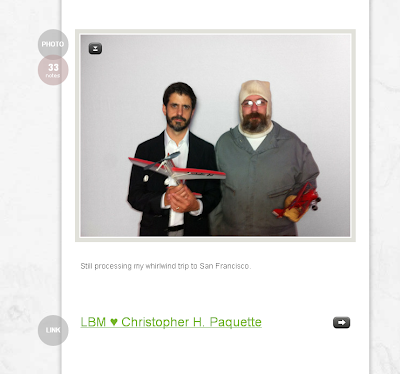 Here are the results to date for the survey posted yesterday on the subject of photo competitions and juried exhibitions. From the stats I get through the survey provider, I'm told that about 350 people have viewed the survey, while a little less than 60 actually voted on the questions. My guess is that people are a bit reluctant to participate in these types of online surveys. Or they thought the questions weren't worth answering. Could be any number of reasons. Thanks to all those who did participate. It is fun and interesting to see the results. Not sure if anything definitive can be seen from the answers. There was a surprisingly even spread across the board on voting, with the exception of the question about deadline extensions. People seem to clearly dislike them. I admit the wording of my question was somewhat biased, but only five people voted no in response to whether or not deadline extensions were a scam. It is also pretty clear that the vast majority of people are using competitions as a way to market themselves and gain exposure.


I would love to get many more participants in this survey. Voting will remain open indefinitely, so you can still participate if you haven't already done so. Please continue to share the link to the survey with your networks.  I'll update with new results periodically. The link is at the bottom of this post. Thanks again, and here are the results...

How many photo competitions or juried shows do you enter each year?

What is the primary reason that you enter photo competitions or juried shows?

How do you react to a competition deadline?


Are deadline extensions a scam?

What is your breaking point for entry fees?

Photo competitions have been on my mind lately. Everything from the business side of competitions and juried exhibitions, to the psychology of fame and recognition. I've started a spreadsheet to track some basic data on as many calls for work as I can find. I'm watching for trends in entry fees, sales commissions, deadline extensions, and prize money. What am I looking for? I'm not really sure. But I have seen very little written about this topic, either from the money side or the psychological side. If I can develop enough tangible data I'll write something about it.

I made a quick and easy survey on the subject.  No science behind it at all. Five questions about photo competitions and juried exhibits. Shouldn't take more than a couple minutes to take the poll. No signing in required, and your answers are anonymous.

The Indie Photobook Library will be part of a mini book fair this weekend at the Flash Forward Festival in Boston. The festival presents emerging photographers from Canada, the U.K. and the U.S.A.
I was delighted to learn that My Own Wilderness will be among the books on display. The mini book fair will consist of a selection of artists books and zines from Printed Matter, Inc. as well as 250 books curated by Indie Photobook Library director Larissa Leclair.


As a bonus, all Flash Forward lectures and panel discussions are being live streamed by Flak Photo.