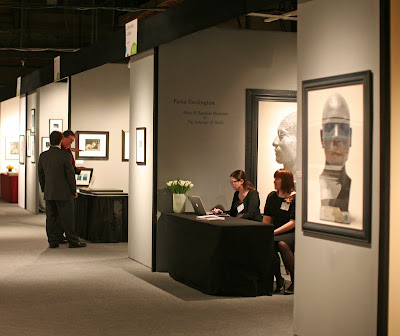 Some really fine work on the walls at this years AIPAD show at the Armory , 67th & Park Avenue in New York City. The show starts today and finishes up on Sunday. Here are some more selections from what caught my eye...

Yossi Milo Gallery has some beautiful work by Sze Tsung Leong's Cities series. I first saw Leong's work on the walls several years ago when Yossi Milo presented an exhibit of his Horizon series. Milo also displays some interesting work by Yuki Onodera, Look Out The Window.

A nice grouping of Stephen Shore photographs. Unfortunately I didn't make note of which gallery was presenting these. If anyone knows, let me know so I can give proper credit.

Benrubi Gallery had this grouping of six Lewis Baltz images, some from the Park City series, and others from Baltz's early Prototype series. The asking price for these photographs ranged from $18,000 to $25,000. Total price for all six is $135,500

This was a mesmerizing wall in the Halstead Gallery booth, consisting of work by Arnold Newman, Andre Kertesz, and Aaron Siskind. Halstead has a stellar collection of work by the masters of photography.


Some interesting individual pieces. Quite a few Harry Callahan photographs throughout the show, and I particularly love this silhouette of Eleanor, 1948 in the Gitterman Gallery booth, priced at $25,000

I seemed to see dozens of Andre Kertesz photographs at AIPAD, which was interesting because I walked the floor with Susan May Tell, who spent many hours with Kertesz shortly before he died. I was enthralled by Susan's recollections of reviewing prints in Kertesz's apartment and shooting some of the last portraits ever taken of the great photographer. In fact, Susan May Tell's photograph of Kertesz was used in the New York Times obituary when he died. This photograph, Martinique, presented by Joel Soroka Gallery has long been a favorite Kertesz image for me.

And this rare photograph by Henri Cartier-Bresson, Two Women Crossing The Street, taken in Cuba in 1963, presented by Throckmorton Fine Art. I spoke to Spencer Throckmorton about this image because it is so similar in style to work I have been reviewing recently by Philadelphia photographer Philip Taylor who did some interesting street photography in Cuba in the late 50's and early 60's. This Cartier-Bresson image is priced at $15,000

Email ThisBlogThis!Share to TwitterShare to FacebookShare to Pinterest
Labels: New York Photography
Newer Post Older Post Home
PHOTO/arts Magazine is a compendium of photography and contemporary art topics. We regularly feature the work of emerging international artists. Created in 2006, Christopher H. Paquette is the editor and founder. Feedback, comments, and submissions for publication are always welcome.
email the editor